If you’re a restaurant owner, chances are you’ve worried about employee theft a time or two, maybe more. After all, it’s one of the biggest issues facing your type of business. You also know that surveillance cameras can help. Typically, if someone knows they’re being watched, they won’t steal. But did you know that installing cameras can help your business beyond theft?

Here’s how surveillance cameras can reduce theft, help you in liability claims, and improve employee productivity at your restaurant (it can even increase check revenue!). But, be aware, there are also some risks to this tactic.

How cameras reduce theft at restaurants

You might think that surveillance reduces employee theft because it exposes their crime on camera. Maybe you imagine yourself reviewing the tapes at night and catching every employee that steals from you. But these cameras can do so much more for you.

People act differently when they know they’re being watched. Take this Harvard Business Review article, for example. The article talks about issuing body cameras for police officers following the officer-involved shooting of Michael Brown in Ferguson, Missouri. Fifty police officers from the Ferguson Department were issued body cameras after the controversial shooting. Before wearing body cameras, the officers initiated physical contact in 24% of their encounters, but that number dwindled to 0% once they were wearing the cameras. So, how does this apply to restaurants?

A similar change occurred when Washington University conducted a study observing the behavior of employees that were under electronic surveillance in 400 restaurants across America. The study found that surveillance reduced employee theft on average by 22% (equaling $24 per week saved). Three months after installing surveillance, theft was down even further, equaling $48 per week saved.

You might be surprised to hear that preventing theft is only one of the benefits to adding surveillance.

Beyond helping you prevent employee theft, your surveillance cameras can actually help you in the courtroom. Surveillance footage you capture of your restaurant can be used to support your company when there are property damage or customer/employee liability claims.

For example, a young woman walks into your restaurant, trips and falls. She breaks her nose and has a bruised cheek. She claims there was a hazard that caused her to trip and says she’s going to sue your company. However, your camera footage reveals that she was actually too engaged in her cell phone and tripped over her own two feet, making her responsible, not your company.

Think about it. Just a few minutes of video could save your company thousands, tens of thousands, or hundreds of thousands of dollars in loss and increased insurance premiums. We think that’s well worth the cost of the surveillance system. Don’t you?

Maybe you already knew surveillance could benefit you with liability claims, but did you know that installing cameras in your restaurant can actually encourage your employees to be more productive? It’s true!

Why does surveillance boost productivity?

Remember the last time you waited in line at the bank? You knew there were surveillance cameras, and depending on the bank, you could see the line of people waiting on a TV screen in the corner. Even though you weren’t planning to rob the bank, you still felt a bit nervous about the cameras fixated on you, so you stood taller, kept your hands at your side and tried not to make any suspicious facial expressions.

The same can be said for your employees. If they knew you were watching, how would they act? Not only would they be deterred from stealing, but they’d work harder.

The same Washington University study that found adding cameras reduced employee theft, also found that after surveillance was installed, check revenue increased by 7% ($2,975 per week), total drink revenue by 10.5% ($927 per week) and tips by 0.3%. As a result of the cameras, employees who would have otherwise drained resources became more productive and increased overall revenue.

While employee surveillance can bring your restaurants many benefits, it also has its disadvantages.

The risks of employee surveillance at restaurants

Although surveillance at your restaurant could be beneficial, it could also have unintended negative consequences.

One consequence could be that employees play it safe to avoid punishment. For example, an employee that thought of an innovative way to stock inventory that saves time and money might not use it because she’s afraid of getting punished for not following the process. At the same time, she might be more cautious in going the extra mile for customers, which can reduce customer loyalty.

To avoid this, encourage your employees to bring innovative ideas to the table. One way to do this is through regular meetings with the staff or with a suggestion box.

You should also set up programs to reward employees for going the extra mile to help customers. Make it clear that going above and beyond is a good thing and will be rewarded.

So, is surveillance right for your restaurant? In our opinion, it may be worth the investment to prevent theft and encourage productivity. Pairing surveillance with friendly, reward-driven challenges amongst employees may be an even better option.

Cameras are just one way to prevent loss

When talking about restaurant loss prevention, employee theft is just a piece of the pie. Loss prevention is about identifying and recapturing funds of all shapes and sizes. These losses can stem from various sources and are often times hard to locate and even harder to know if investigation is worth your time and resources. That is, until Delaget Guard came along.

Make it easy on yourself and your restaurant managers with Delaget Guard loss prevention software for restaurants. Click here to learn more! 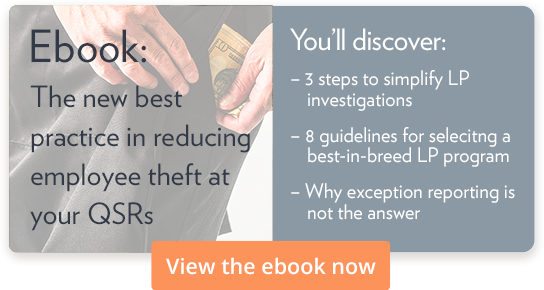